Rescue Dogs Rule. (Or my thanks to those who passed them on)

“I only work to keep my rescue dogs in the manner to which they have become accustomed” I’m sure some of my customers think I am joking when I say this, but refer to my earlier blog about the costs of dog ownership and times that by 9.

Lets get this straight, I will not begrudge or slate anyone who has to give their dog up for rehoming or rescue, when circumstances dictate that it is the best course of action for the dog. It happens. Its easy to say I will live in a caravan in a field first, but sometimes that caravan is not always available. What does get me is those that are abandoned, thrown out beca 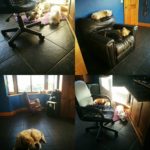 use they are no longer financially viable, those that are out of fashion or become too expensive or boring. I’m sure we have all seen the adverts and those who have been around a while can read between the lines.

The main point of this whinge though is to highlight the work of some of our small local rescues, and why I am glad some people did discard their dogs. ” Glad!” I hear you cry, yes glad, because without those irresponsible people we would not have six of our gang. The other three I would call responsible rehomes, and I know it upset deeply the people who had to do it.

I will Leave George the Third, Buster and Pheobe for another day as they I would term rehomes, but let me tell you about the joy the rest of the gang have bought, and why I will keep saying rescue dogs where you can.

A lady who shall remain nameless, stitched me via facebook for grooming these two ladies who were frequent escapers, the human they lived with decided he had enough of their antics, and let the warden keep them.

I was smitten the first time I met them. Skye was the more timid of the two, but has eyes you can fall into. Ruby is a little plumper, and with her head at a certain angle does a passable impression of yoda, thanks to the lie of her ears. As the rescue was at capacity ( a not uncommon occurance) we offered to foster these two dogs, right up to the point it was mentioned the difficulty in rehoming two dogs together. We failed at fostering we were now adopting, this was before  we got them into the car. 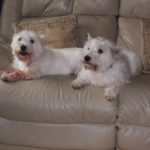 Originally outside dogs, since been with us they have adapted well and have proved a delight when we have taken them on stress busting visits for students. We have had the occasional accident,but we have a mop. It was also beautiful seeing them act as surrogate moms to two of our younger dogs.

Knowing people who run a rescue can be expensive. Travelling as I did, I was asked whether I could transport a dog from one rescue centre who were full (can you see a common theme here) to another. The picture was circulated on facebook, to try and find a home. The sight of Poncho attracted the attention of my daughter and wife. To be fair who could resist a ball of fluff. 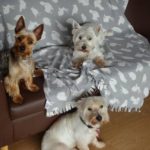 A breeder cast off because he had a hernia and was going to cost money. This little fellow now is full of spirit. When on a walk he will beat the bigger dogs to retrieve a ball, and then coming running past , turn tightly to outpace them, then drop the ball at your feet to get a head start for the next round.

What amazes me is, I haven’t taught him fetch, he is a natural. When he sits on the window sill late afternoon, with the sun setting behind him, the shadow he casts is batdog..maybe that is how he knows.

Well everyone loves Bugsy. He is my prime example of why perseverance pays. I met him the same time as dropping Poncho off. He was a scruffy, smelly, matted small dog, a split down the centre of his nose, wonky teeth, one ear sticking up and the other falling down. I am a big rufty tufty, I do not do small dogs, and there is no way I would have a yorkie. 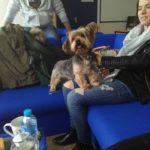 These eyes looked straight at me through the kennel door, and I knew he was coming home with me. Persuading the good lady may have been difficult, but working on the theory she knows I can’t afford another divorce, I didn’t tell her. Not I hasten to add a course of action I would recommend. Fortunately she too took to him. For the first eighteen months, he would not approach anyone else and was very much “my” dog. Where ever I was in the house he had to be. If I wasn’t around, his favourite spot was under the Kitchen Cupboard. Over the last 12 months however, he has comeout of his self, and will now approach others for a fuss. In fact he is the one most people want to take home with them. 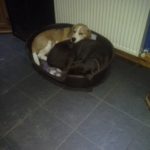 Shadow and Bailey cwtched up

Velcro would be a more appropriate name. A dog who just loves human company and has to be by your side whenever possible. So close that if you turn you fall over. Like George she is a master at the “Your hand needs to be stroking me” muzzle flick.

An ex breeder, she came into rescue about a month after we lost our permanent foster lab Minnie through old age. A contrast in character though, she is full of life on a walk, loves lying by your feet when she isnt, and her bark…Shes scared a few people knocking at our door, it comes right from her chest.

Often refered to by my son as bagle, and by me as L.S. The sweetest most affectionate dog you could ask to meet. Loves people, loves fuss. Came into Rescue 2015 where he spent some time, was adopted, but then sadly came back as he was a bit of a handful.

Handful could be considered an understatement. After all this time around dogs, I fell for the sweet looks, the big brown eyes and his response to sit and recall. This was, however, in a confined space. The plan was to foster him, to avoid going back to kennels, and to get some of 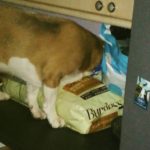 the excess weight off. The first week was so good, I let him stay. 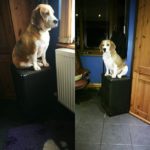 The second week I began to understand why he may have found himself where he was, together with Shadow they managed to gain access to the utility room, break into the freezer and empty the veggies. They did however kindly leave all The Quorn goods favoured by my daughter. The next trick was to pinch a joint of beef of the counter whilst I was distracted, hes a generous dog though he shared it with the other six in the room at the time.

Glad they were in Rescue? 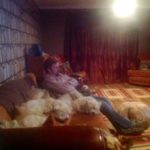 Its been a long day

The point is every dog, rescue or otherwise will have their baggage in the same way that we do. If we accept that, as they accept us, we can help them carry it instead of using it against them.

So that is why I am to a certain extent glad they ended up as Rescue dogs, it may sound selfish, but each one of them has bought their own character, love and feeling into our home, and without the people that felt the need to pass them on, myself and my four legged mates would not enjoy the life we do

Our Website uses cookies to improve your experience. Please visit our Rescue Dogs Rule. (Or my thanks to those who passed them on) page for more information about cookies and how we use them.