Two years ago I was forced into a position where I had to slow down for health reasons. During this period of time, I have had my eyes opened to the work of those who help rescuing and rehoming Dogs.

The aim of this is not to argue the why’s and wherefores of various organisations, but to highlight a “Happy Ending” I have witnessed. In fact its not so much a happy ending, as a new beginning.

In December 2012 I was introduced to Charlotte, who together with her partner Paul, run Walkies Dog Rescue. During conversation she mentioned a pug cross, who was quite adverse to been groomed..in fact so much so, if he saw a brush he would try and bite it and your hand.

Somehow I seem to end up with a few dogs who don’t like been groomed, who will settle for me..and I will maintain that its quite possibly because I am big and hairy and smell like another dog. 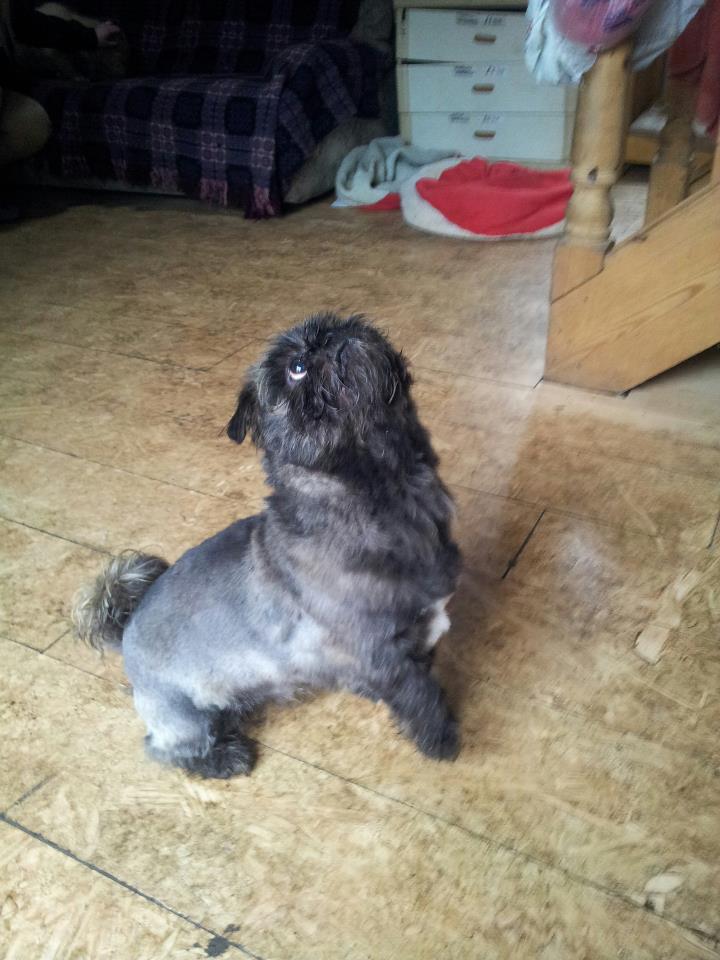 Bernie after his first session

The first time I met Bernie, he hated anything involved in grooming, clippers, scissors, dryer etc. To go within six inches with any of the above would risk injury. After a long first session, we managed to get him comfortable enough with the sound of the clippers, to be able to do his sides and back. Another session followed a few weeks later, where he allowed us to his face and scissor his legs.

Not long after this, he was rehomed with a retired couple, who I’m pleased to say, decided to carry on his regular grooming with me. Each time he has been we have slowly built up his confidence. Today is the first session he has had where he has not tried to nip me at all during the process.( Click Here to see todays session)

Now here’s where the behavior reference comes in. I quite often think that the biggest hinderance to a dogs well being, is the bipod at the other end of the lead. Over the last eight or so months, I have seen Bernie go from a dog that had landed in Rescue with a bit of an attitude, to a lovely lad who is quite people orientated.

On my travels I have often seen his hoomans walking him, and he can be out two or three times a day. The affection he shows back is quite visible in his face,as he looks up to them. It would appear that in having good communication with the owners, over what to expect from the grooming process, and how they can help in between, we now know a very settled dog.

I believe that dogs are like us in so much as its several factors that lead to their contentment, their environment, affection and praise shown, building up their confidence.

Taking on a Rescue dog can be a risk, especially where the history is unknown. The degree of patience, understanding and trust will vary from dog to dog, but it is very much a two way street..Its not all the dogs fault, we have to play our part too.

Our Website uses cookies to improve your experience. Please visit our I’m no behavourial expert…But.. page for more information about cookies and how we use them.